These columns were designed for the Green Festival - the theme this year was Oslo Fjord, and every face of every column has one or more elements that were snipped from photos taken in and around our fjord. Three columns, 180cm, 160 cm and 140 cm, were designed to stand in the deep shade, in a forest, preferably close to a stream. But they work in a shady corner anywhere! If you would be interested in having them on display, contact rowen@birchtreeroad.com 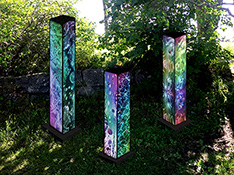 Projected installation nr. 2:
In the woodland
at the end of our lane

Projected installation nr. 3:
In the woodland
at the end of our lane

Panels for the installations

Panels for the 180 cm column

Panels for the 160 cm column

Panels for the 140 cm column

Panel 1 - Frozen Fjord: Based on a black and white photo taken by Mariann Agdal in Vollenbukta, Winter 2019

Panel 2 - Ice on the Windscreen: In the background I have adapted a photograph taken by my friend Mette Schau, of ice patterns on her car window. The globes are created from a SEM by Maurizio Angelis of cancer cells creating their own blood vessels, while the crystals are from my own sketches of loperanimide, a medicine used to treat diarrhea.

Panel 3 - Ice Crystals Forming: This picture is created from ice crystals, salmonella and salps. Salps are large jelly-like tunicates living in the ocean. They create huge colonies, sometimes formed like balls, like the ones in this picture, sometimes like chains up to several kilometers long. The picture was downloaded from the Ethogram website, the blog of the UC Davis animal behavior graduate group. The ice crystals were formed on freezing soap bubbles, photographed by Angela Kelly.

Panel 4 - Hail: Based on pictures taken in our garden, autumn 2019, when the ground was covered with hail. The floating globes are Covid 18 viruses

Panel 5 - Reflection This picture is based on a photo I took of the underside of a white russola mushroom in our garden. And bubbles, of course!

Panel 6 - Water Droplets: Here I have made use of two photographs taken by my friend Charles Patey: in the background is a photograph of water droplets taken just in the split second that they enter the water, and in the foreground a dew-hung web. The bubbles are from photographs I have taken myself, both of bubbles and of glass balls.

Panel 7 - Jelly Fish: Here I have used photos I have taken of jelly fish in Oslo Fjord.

Panel 8 - Ripples: Based on a photo taken in Ursvikbukta, with a background of ice crystals found on our rubbish bin - they looked just like corals.

Panel 9 - Soap Film: The background is created from a polarised light picture of a soap film by Minato-ku Kohnan of Tokyo Metropolitan University. The globes are SEMs of flower pollen, used under licence from Science Photo Library.

Panel 10 - Snow Crystals and Steam: In the background, a manipulated photo of steam, and in the foreground a collection of snow crystals

Panel 11 - Water Erosion: I can't remember where this photo was taken. I have also used pipe sponges in this picture

Panel 12 - Phosphorescence: The background here appears to be seaweed, but is actually a SEM ogf stem cells, created by Sharona Even-ram of the Hebrew University, Jerusalem. The picture is populated by salmonella and diatoms (one of the many microorganisms that cause phosphorescence on the ocean).